PROPOSALS BY CHAIRMAN FOR NEXT DMC BIDS 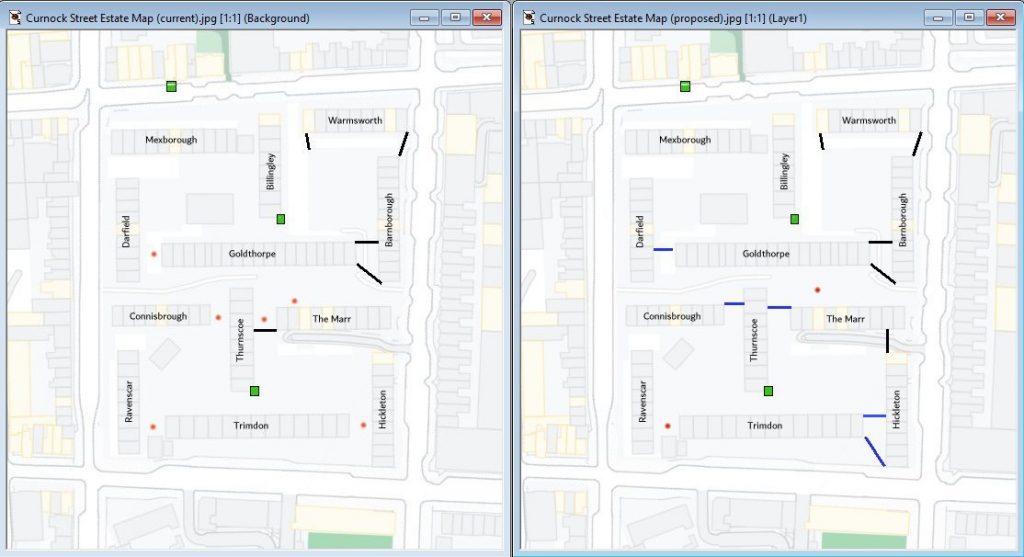 A. GATES – THE MARR & THURNSCOE

In our previous meetings we have agreed to not proceed with the relocation of the blue gates between The Marr and Thurnscoe for many reasons.

Firstly, we wanted to make sure that the current measure of locking the current gates will work. After the recent talks with residents and from my own experience I think that the measure had a small but positive impact.

The current gates are not located in the optimal place and they are not tall enough to have the maximum effect.

The new proposal will suggest the gates to be moved closer to the front of The Marr and maybe be replaced with higher more secure gates. This will stop ASB people of using the dead end area for drug dealings.

FEEDBACK A: What is your experience with the current measure and what is your feedback about this proposal?

After my recent conversations with certain residents I became aware of problems in the areas between Hickleton and Trimdon as well as between Trimdon and Ravenscar.

The problems are similar to the ones that we had in Goldthorpe before the installation of the security gates. Those gates had a huge positive impact to all the buildings nearby including Barnborough, Goldthorpe, The Marr, and Billingley.

ASB had decreased by a huge percentage because ASB people do not want to be corned by the police so they prefer locations with more exits and escape routes.

Our proposals is to install similar gates to the pathway between Trimdon and Hickleton. This will reduce the escape routes for ASB people but it will not reduce the residents’ access to the playgrounds or other buildings.

FEEDBACK B: What is your experience with the current situation and what is your feedback about this proposal?

As you can see from the attached draft map two of the areas that are misused by the ASB people are near Thurnsoce and the rear of Darfield.

The rails on Thurnsoce will not have any impact to the residents but the rails on the rear of Darfield will reduce residents access from and to Goldthorpe. Residents will still be able to visit all areas by the Pratt Street entrance.

The rails on the rear of Darfield is not my preferred option because the problem can be addressed with a CCTV camera which we have also requested.

FEEDBACK C: What is your experience with the current situation and what is your feedback about this proposal?